As news of an early start to the bush fire season is reported in the media, we tend in Sydney to see it as a concern to those in rural areas.   Memories are short!  Think back to Sydney in January 1994 and then again to Canberra in January 2003.

The 1994 Eastern seaboard fires entered Sydney and threatened the city with total isolation.  The only road or rail route out of Sydney for several days was the Hume Highway.  Ash rained down on the entire metropolitan area and the sky was orange for days.

Of the 225 homes destroyed by fire across the state, some of these were here in our northern suburbs in Warringah, Ku-ring-gai and Lane Cove where 42 houses were destroyed.

In Canberra, the bush fires claimed a further 4 lives, injured hundreds of people and destroyed 500 homes. 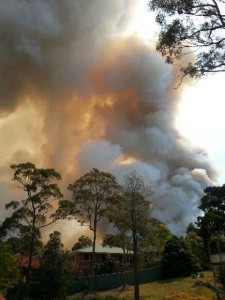 El Nino which brings dry and warm conditions, coupled with below average rainfall for over a decade means this summer we should expect another year of above average fire risk.  The below average rainfall that we’ve been experiencing each year has meant we have a drying landscape, exacerbated by the strengthening El Nino in the Pacific.  However the drying effects have been partially offset by record warmth in the Indian Ocean off WA, which has meant more clouds and rain than may have been delivered when experiencing one of the strongest El Ninos on record.  These very complicated weather patterns interact, combine and in some cases offset each other.

Weather conditions play a significant role in the behaviour of bush fires.   When the elements of weather combine they can produce optimum conditions for the ignition and spread of fires.  This typically happens 4 to 6 times in a bush fire danger season.   “Blow up days” as the fire fighters refer to them, occurred 16 times in a row in January 1994.

If the experts and the recently published “Southern Australia seasonal bushfire outlook for 2015-16” are correct, Sydney and the surrounding areas are likely to have a busier than usual bush fire season.

Much has been learnt since the fires which raged in Sydney and then Canberra and advances in communications mean that those at risk can be kept informed by Apps and SMS to enable them to make timely decisions about whether to stay or leave.

The fires in the Blue Mountains in 2013 destroyed over $180 million of property.  Approximately 80% of those affected were under-insured and only about 12% had total replacement policies for their property.

Our advice is Prepare and Protect yourself for when fire once again threatens to encroach upon the area we live in.

Visit www.myfireplan.com.au and read their Bush Fire Survival Plan and make sure you’re insured to replace any property that may be damaged.   If you’re not sure you have the right cover, talk to one of our insurance brokers on 1300 784 011